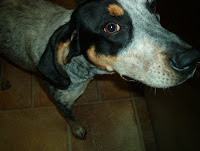 We are unsure of Lucky's breed...my husband (Tony) thinks he is some sort of bird dog. Tony found Lucky on a job site. He was being hunted by a very aggressive Coyote. The owners of the property didn't want him and Tony was afraid for the dog's safety so he brought him into the neighborhood to find him a home. 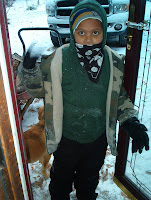 He was taken to the Flannagan house, where he was named "Lucky" by the adults and "Spot" by Mister Tray whose picture is above. So we call him "Lucky Spot". Unfortunately, they have decided that they are housing too many animals and have asked us to find Lucky Spot a new home. 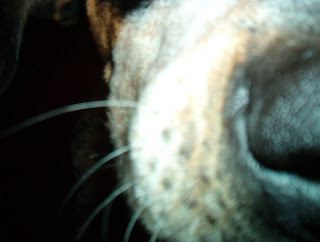 Lucky is very smart, but still has a lot of puppy in her. We think she could be trained with a little patience and a lot of love. She is great with the other dogs. See picture of Lucky pestering "Trouble" below. She has also been trained to leave our cats alone. At first she thought they wanted to play with her, but they let her know that they didn't find her amusing. 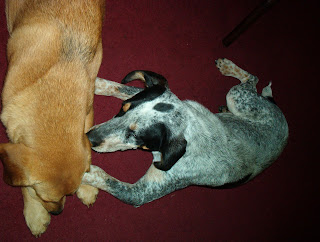 If anyone is interested in taking Lucky Spot please email me. I have a short window of time before my husband becomes attached and then we will be housing five dogs and three cats.

Posted by Louise June Miller at 3:31 AM No comments:

Someone sent me this email. It made me cry it was so sweet.
......
I am a mother of three (ages 14, 12, 3) and have recently completed my college degree. The last class I had to take was Sociology. The teacher was absolutely inspiring with the qualities that I wish every human being had been graced with.
Her last project of the term was called, 'Smile.'
The class was asked to go out and smile at three people and document their reactions.
I a m a very friendly person and always smile at everyone and say hello anyway. So, I thought this would be a piece of cake, literally. Soon after we were assigned the project, my husband, youngest son, and I went out to McDonald's one crisp March morning. It was just our way of sharing special playtime with our son.
We were standing in line, waiting to be served, when all of a sudden everyone around us began to back away, and then even my husband did. I did not move an inch... an overwhelming feeling of panic welled up inside of me, I turned to see why they had moved. As I turned around I smelled a horrible 'dirty body' smell, and there standing behind me were two poor homeless men. As I looked down at the short gentleman, close to me, he was 'smiling' His beautiful sky blue eyes were full of God's Light as he searched for acceptance. He said, 'Good day' as he counted the few coins he had been clutching. The second man fumbled with his hands as he stood behind his friend. I realized the second man was mentally challenged and the blue-eyed gentleman was his salvation. I held my tears as I stood there with them. The young lady at the counter asked him what they wanted. He said, 'Coffee is all Miss' because that was all they could afford. (If they wanted to sit in the restaurant and warm up, they had to buy something. He just wanted to be warm).
Then I really felt it - the compulsion was so great I almost reached out and embraced the little man with the blue eyes. That is when I noticed all eyes in the restaurant were set on me, judging my every action. I smiled and asked the young lady behind the counter to give me two more breakfast meals on a separate tray.
I then walked around the corner to the table that the men had chosen as a resting spot. I put the tray on the table and laid my hand on the blue-eyed gentleman's cold hand. He looked up at me, with tears in his eyes, and said, 'Thank you.'
I leaned over, began to pat his hand and said, 'I did not do this for you. God is here working through me to give you hope.'
Note: The only thing I would point out is that her act not only gives him hope, but gives her hope also....and I'm feeling very hopeful today because of this story! Thank you to the person who sent it to me and the one who wrote it.
I have also enclosed a link to an article that is talks about happiness being contagious. It seemed appropriate.
http://www.washingtonpost.com/wp-dyn/content/article/2008/12/04/AR2008120403537.html?nav=rss_health
-----
Posted by Louise June Miller at 3:59 AM No comments:

I saw with my own eyes how the cooperation described in the Stone Soup Story can produce results. The owner of our company is very involved with the homeless, so we have contact with lots of people with special needs. A deaf man stopped by on Tuesday and said that he needed food. In fact, he needed enough food to last him one week.
The good news that he just got a job at Walmart---the bad news is that his 1st paycheck wouldn't come for a week. He was out of food and hungry. A mass email was sent out to my co-workers and in one day’s time enough food was gathered to feed this man breakfast, lunch and dinner for over a week.
Some people dipped into their stash at work providing cans of tuna, soup, chili and ravioli. Others looked in their home pantries and brought in peanut butter, cheese, boxed casseroles and soda. Others went to the store and picked up meat, eggs, pumpkin pie, bread and fresh fruit.
Due to the quick nature of needing this food it was only by the process of cooperation and compassion that this small endeavor was accomplished. (We started with just a stone.)
Each of us helping just a little...helps a lot
Posted by Louise June Miller at 3:51 AM No comments:

HAPPY THANKSGIVING !
Posted by Louise June Miller at 5:37 AM No comments: 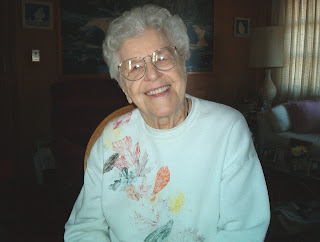 This is my beautiful neighbor --- Miss Stella. She will be 97 years old on December 13th.
So many people are dedicated to providing support to organized non-profit groups, but let’s not forget our elderly neighbors and people right in our community that need a little help.

Helping doesn’t have to involve money…

We all know that large non-profits help lots of people, but it's just as important to help one.

Peace
Posted by Louise June Miller at 7:09 AM No comments: 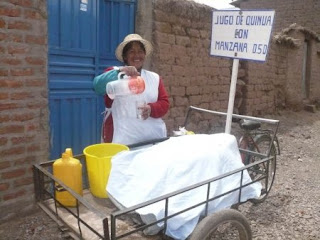 There is a great organization called KIVA. This group facilitates the loaning of money to the working poor. The borrowers barely make enough money to clothe, feed and shelter their families.

Most families are independent entrepreneurs. Through hard work and dedication they are hopeful to make a better life with a little support from people who are more fortunate.

This is really a loan and not charity. I have been paid back on many loans. You have the option to have the money refunded to you or you can reinvest in someone else’s future.

I am one of several individuals that loaned money to the lady above. Her name is Elizabeth and she lives in Peru. She borrowed $1025 to in order to purchase another tricycle for her juice business. I am happy to say that she paid back every penny.

THIS IS A GREAT SITE. I’m very proud to have a small part in this caring organization. 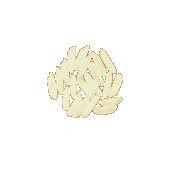 Another great organization dedicated to ending world hunger and improving education for everyone is called Free Rice.

Here’s the catch: you don’t donate money but you play multiple choice games intended to help you improve your vocabulary and grammar. The sponsors of the site donate 20 grains of rice for every correct answer.

Many people say that playing the games on this site is addictive. Better than playing video games and they are using their time doing something that helps reduce hunger.

The advertiser and sponsors of this site pay for the food and the rice is donated through the United Nation World Food Program. 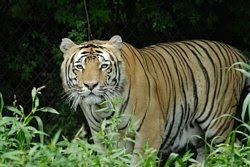 The Exotic Feline Rescue Center is located in Center Point, Indiana.
This is close to our home. I have been taking my Nieces and Nephews there since they were little. (Today most of them are in college but I bet they still remember all the "Big Cats" at EFRC.)
You can donate money directly to the organization or support them by paying an admission when you visit the site. Only $10 per adult and $5 per child. This is not your ordinary ZOO. Definitely a must see if you are in Indiana.
The director has been saving big cats for over fifteen years. They currently have over 190 exotic felines. Most of these animals have been rescued due to being mistreated, abandoned or abused.
They Now Have a Home for Life
Truly a powerful place to visit and money well spent.
www.exoticfelinerescuecenter.org
Posted by Louise June Miller at 8:05 PM No comments: 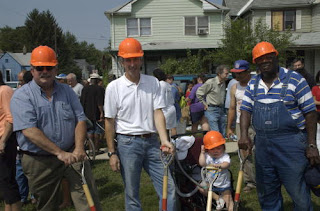 Beggars for the Poor
Anna’s House was founded by Luscious Newsom. Luscious's favorite saying was that he "was a beggar for the poor". He saw the need to feed the poor in the Stringtown/Haughville area of Indianapolis. After years of feeding the needy from a vacant lot he was able to raise funds to have Anna’s House built. Anna’s house not only provides food, but also much needed services such as snack program for local children, tutoring, job training, medical and dental.
Anna’s house was named after Anna Molloy who tirelessly helped Luscious feed the poor every Saturday even though Anna struggled with her own health issues. Before Anna’s House was built, Anna would helped with the program even on the coldest days.
Both Luscious and Anna are no longer with us but their legacy continues in Anna’s House.
http://www.annascelebration/oflife.com/annashouse.html
Posted by Louise June Miller at 6:55 PM No comments:


Today my brother Steven mentioned the Grimm Brother’s story called "Stone Soup".
Wow! I haven’t thought of this story since I was a child.


The story goes something like this: there were some hungry travelers that came into a village and no one would give them any food. So they started cooking a rock in a big black pot with only water as the broth. One of the villagers came by and peered into the soup. He said "Are you cooking a rock?". The travelers reply "yes kind sir…we are making a delicious soup called Stone Soup. It is quite good and would be especially better if we had some potatoes to add". The man said…I have a few potatoes to spare and promptly got them so they could be added to the soup. Then a woman stopped by the pot. The travelers said "we are making our famous stone soup. The only problem is that it would taste much better with a few carrots".

I think you can guess the rest of the story. People continued to bring vegetables and meat until the stew was really an edible and nourishing meal. The soup was then shared with all.

The story speaks to cooperation, teamwork and everyone being better off due to their sharing of resources

So Let’s Make Soup
Posted by Louise June Miller at 4:30 PM No comments: